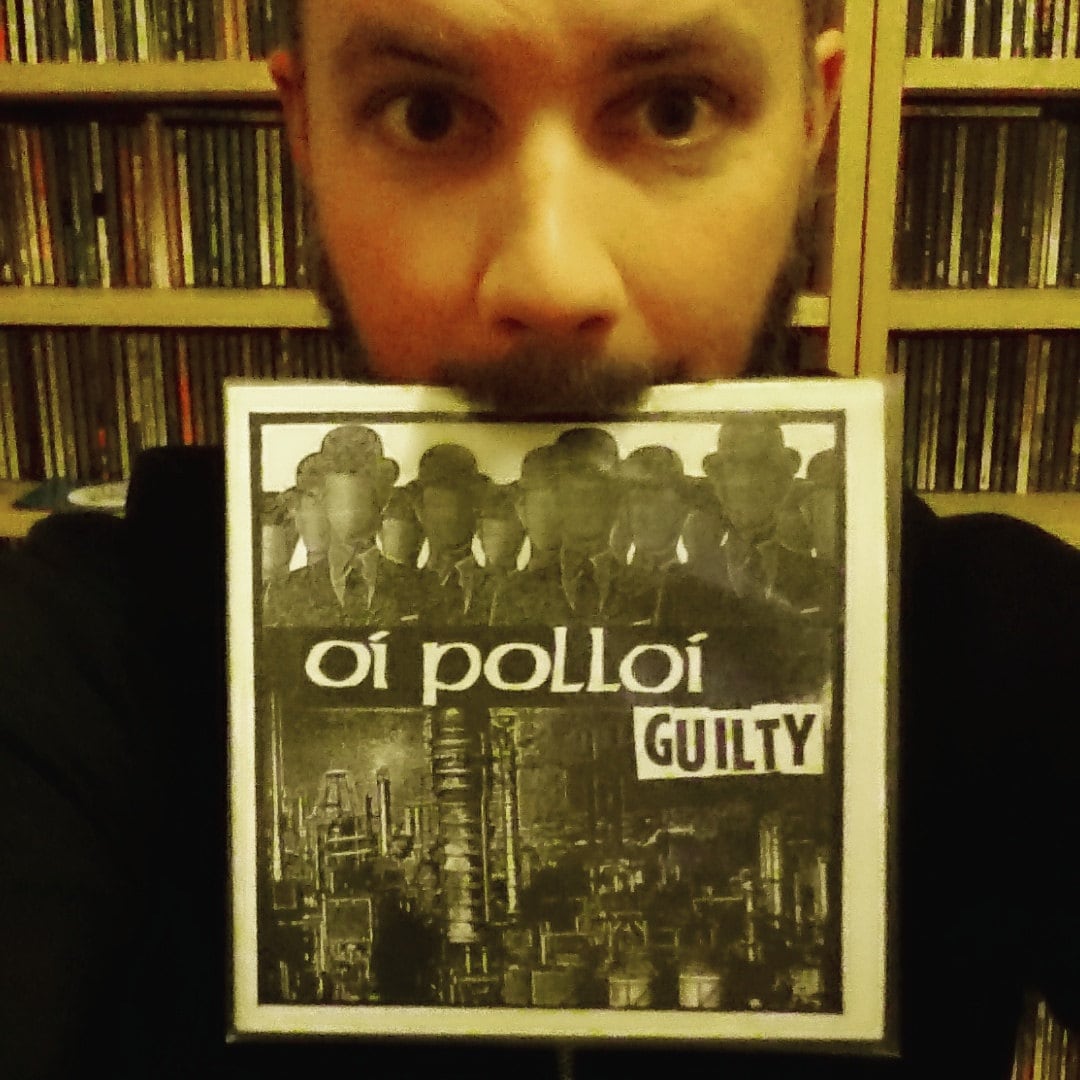 I thought I'd write something about music.

The first time I ever ordered punk records through the post I was 14. The first arrival was an envelope filled with a Crass live tape and the Oi Polloi - Guilty 7". I think it came from Ruptured Ambitions distro, who I think were (are?) based in the west country somewhere. I definitely sent them a cheque and a letter. Google it kids, its a old timey way of internet banking.

I also definitely payed for it with money from an afternoon paper round. You might want to google that too.

I still remember the excitement when the parcel arrived. The pile of flyers and distro lists that fell out when I opened it and the absolute bafflement of trying to listen to a bootlegged Crass live tape with absolutely no context (outside of a cheapo Damned greatest hits, Legacy Of Brutality and Smoothed Out Slappy Hours... my punk education up to that point).

I still find that Crass tape a bit of a chore to be honest.

But Oi Polloi? Oi Polloi made sense. Not only is Guilty a fucking great song but the info booklet that came with it blew my tiny mind. It was my first introduction to a world view and political outlook that I pretty much stand by to this day. That 7" changed my life, not necesarily in a magical Disney sort of way but in a proper nuts and bolts sort of a way. The start of an education.

I'm still getting educated by music. I'm old now, I've heard all of the political ideology punk has to offer (and I don't mean I know it all by any means, I'm just a keen listener) but those parcels still have the same life changing abilities. Its harder to be affected in the way I might have been when I was 14, but I feel at my least jaded and tired the second that one of "those" songs grabs me. You know the ones I'm talking about.

The Darko discography arrived at my door a few days ago. I've seen these guys (and supported these guys) innumerous times over the last few years and they're always awesome. They're also amazingly hard working and bloody nice fellows. That whole CD is a masterclass in techy punk but this song... This song is just perfection. The hugest chorus, seriously, that fucking chorus!! Blows me away every time.

As disgruntled as I remain with the lack of CD options in this "vinyl is super cool" age (I'm from the 90's for fucks sake) I ordered this record on record because of this beautiful song. This band is just so special. The songwriting is utterly perfect and every song holds a certain bitter sweet quality which just hits me every time.

The Murderburgers - "Now That You're Not At #2"

I got a copy of the new Murderburgers CD when they played The Tub last week and it's a fucking masterpiece, its one of those albums that manages to be instant and a grower at the same time which is quite a feat. "Now That You're Not At #2" is one of the most perfect album openers I've ever heard. The lyrics, absolute poetry, that amazing melody, the driving guitars, the Masked Intruder backing vocals... it all adds up to song of the year in my book

You should check out all of those bands. Maybe use those songs as a litmus test. I guarantee you'll be sucked in.

I didn't really want those to sound like reviews but writing about music, particularly the affect that music has on you, is hard and I don't really know what I'm doing writing about anything to be honest. I'll keep trying... Might have to stick to 7"'s and CD's though, its gonna be fucking difficult to fit an LP in my mouth for a selfie.

I might actually talk about coffee too one day, who knows...

Previous Post "If I live until tomorrow, I'm gonna quit my job"
Next Post "Old souls and rogues on the lam again"
0 items in your cart